The EBR-1 was the first effort to construct a fast breeder reactor that could also supply electrical power.  While it did manage the latter, it did not generate Plutonium 239 from Uranium 238 at the hoped-for rate. EBR-2 was built some six miles away with modifications to improve the breeding rate.

The museum is part of the Idaho National Laboratories reserve, a large area in the semi-desert region outside Idaho Falls, Idaho.

Sign at rest area near the site of the EBR-1 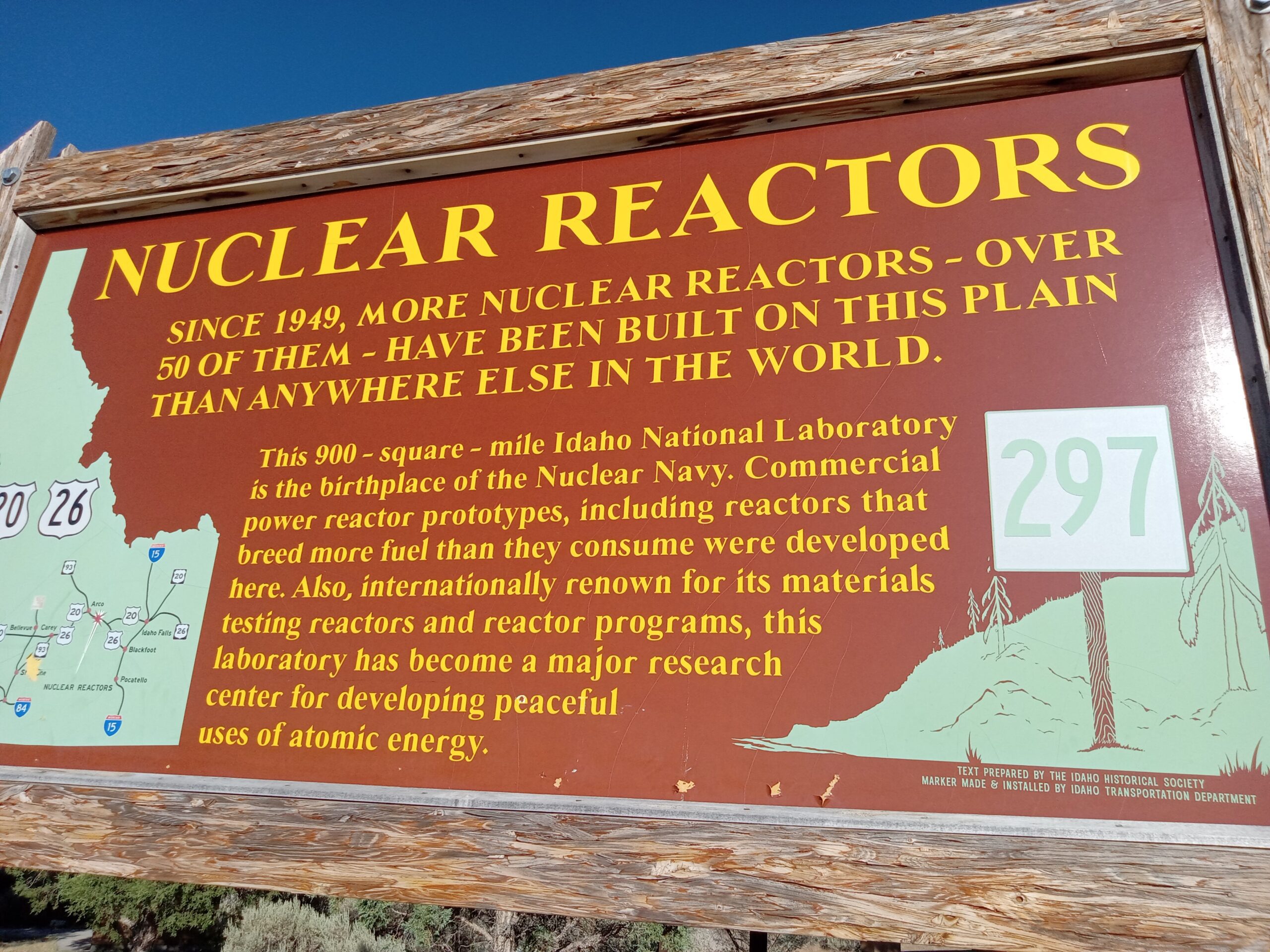 I spent overnight at the rest area, relishing how rapidly the searing heat changed to cooler temperatures after sunset. In the morning I was able to drive to the EBR-1 in about 15 minutes.

Standing in front of the reactor 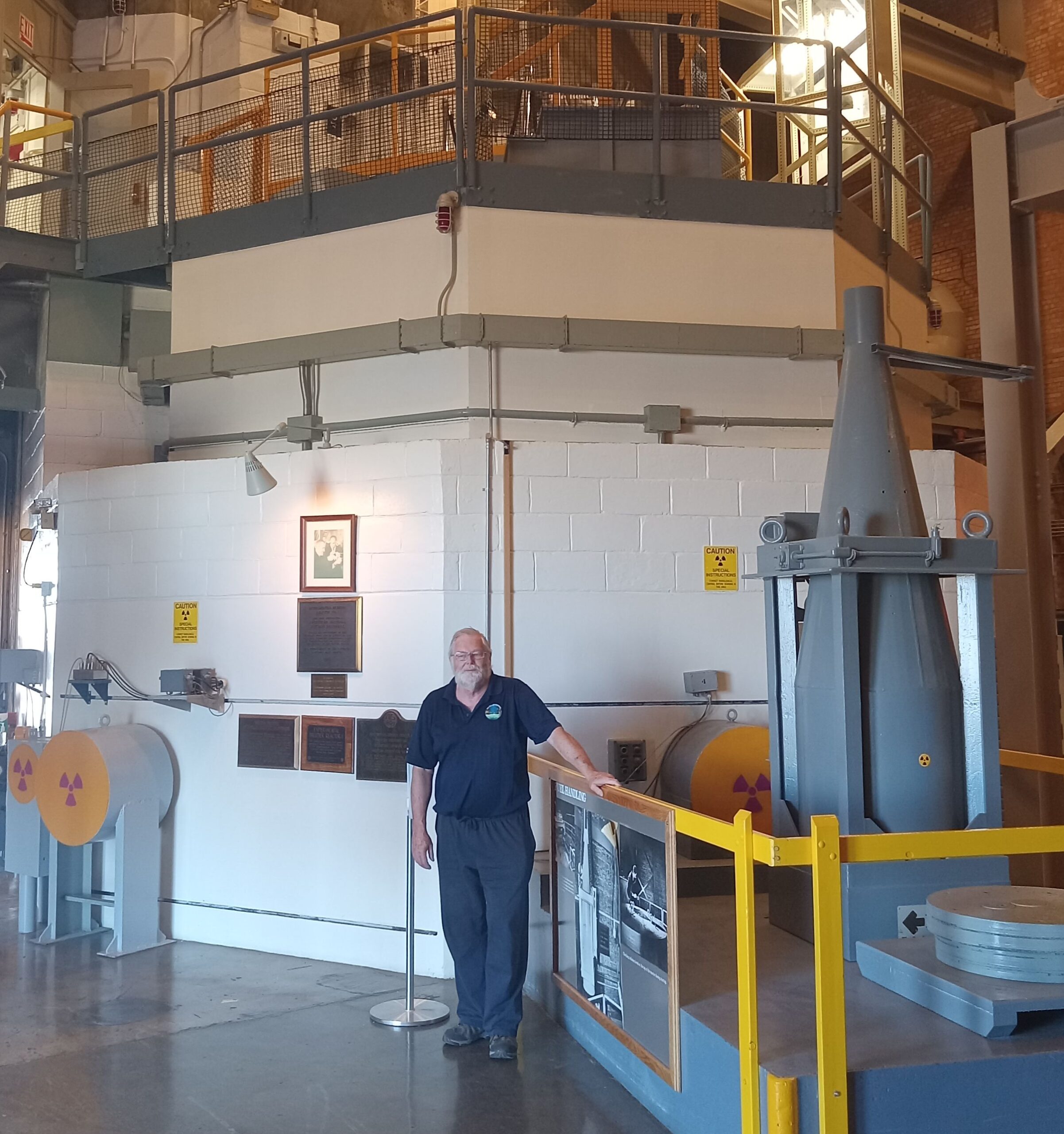 The core of the reactor is, of course, surrounded by shielding, with concrete blocks to halt neutrons. Lead stops photons, like X-Rays or Gamma Rays, but is almost transparent to neutrons.

The largish grey object on the right is a fuel cask, used to lift individual fuel elements from the core for replacement, refueling, etc.

Access ports marked with the quintessential sign for radiation allowed materials for irradiation, instrument probes, etc to be inserted into the core, depending on research objectives. 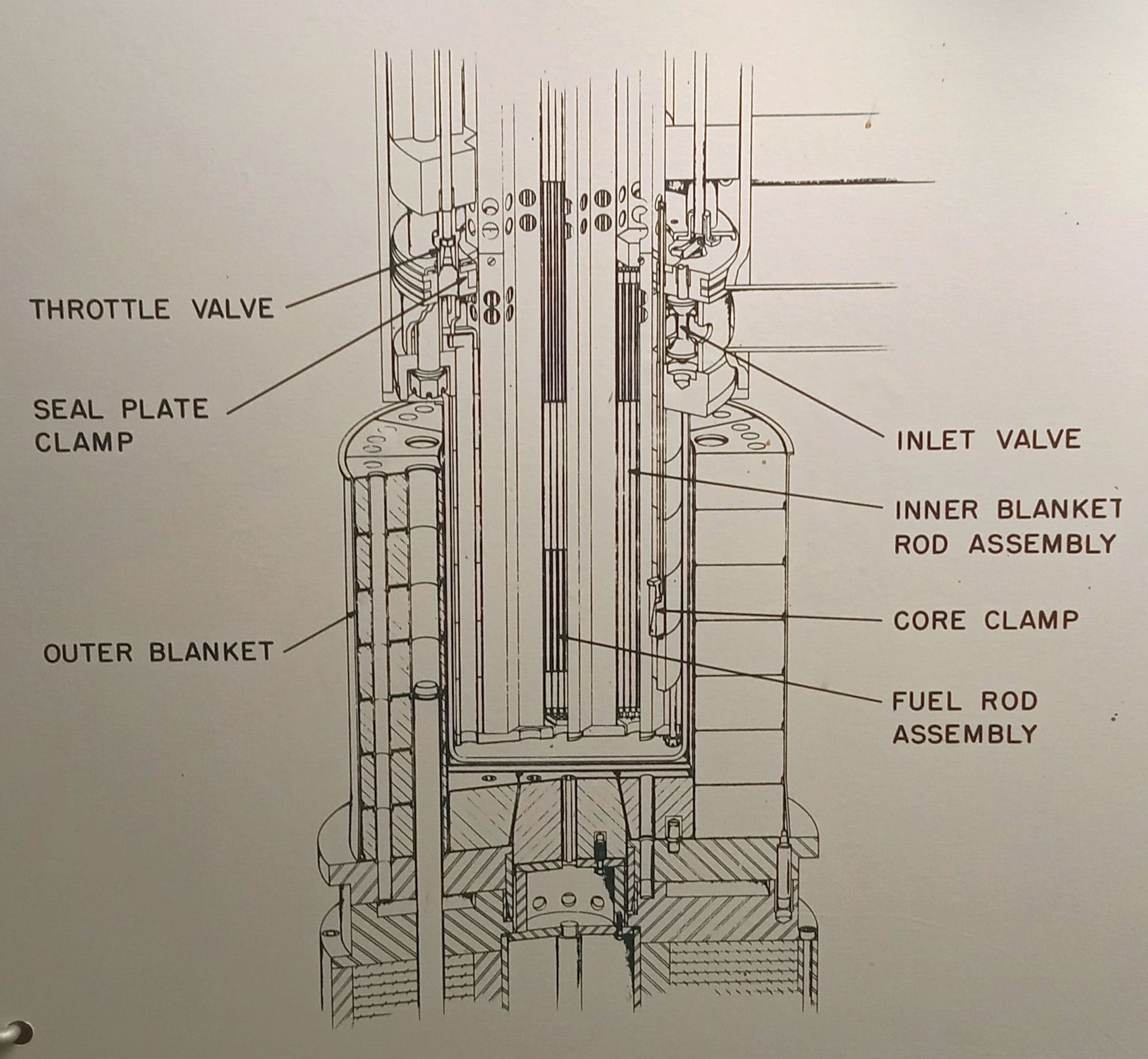 The fuel elements were Uranium Oxide, mostly U238 but enriched with enough fissible U235 (about 6%) to keep the reaction going. The outer blanket was U238, intended to be where the breeding to create Pu239 was to occur. Since U238 reflects neutrons back into the core, lowering the outer blanket below the core with the elevator would allow too many neutrons to escape, and shut the reaction down.

Fission from U235 occurs best with relatively slow neutrons, while absorption by U238 is best with fast neutrons. Most nuclear power reactors have a moderator that reflects and slows the neutrons down. Graphite, heavy water, or ordinary light water are typically used.

Here the coolant was an alloy of sodium and potassium, NaK for short. This did not do much to either slow or absorb the neutrons, leaving many fast neutrons to proceed into the outer blanket. Reflections among the U238 provided enough moderation for slow neutrons to keep the reaction going, in addition to the absorption of faster neutrons for breeding more Pu239.

Elevator control for raising and lowering the outer blanket 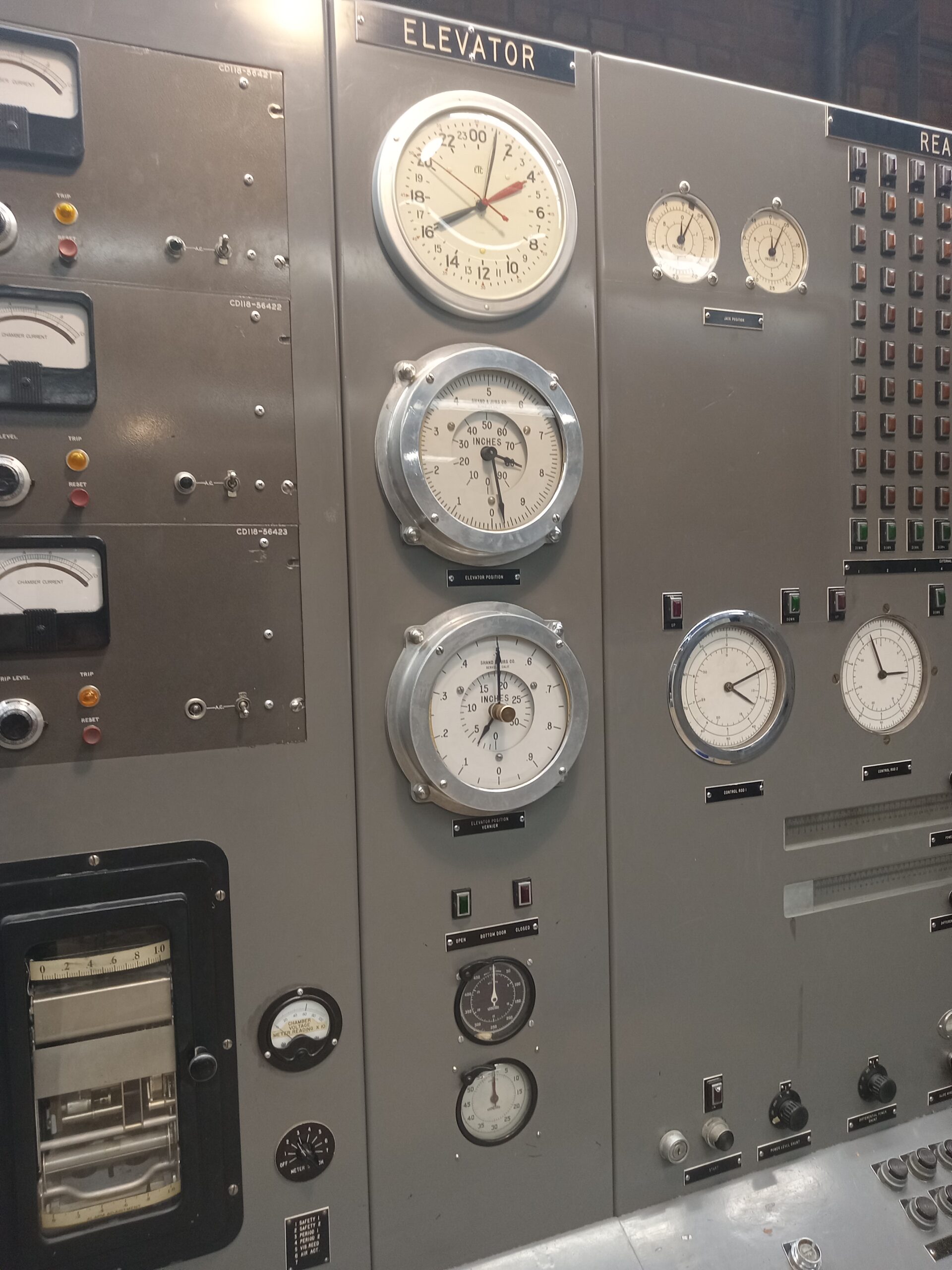 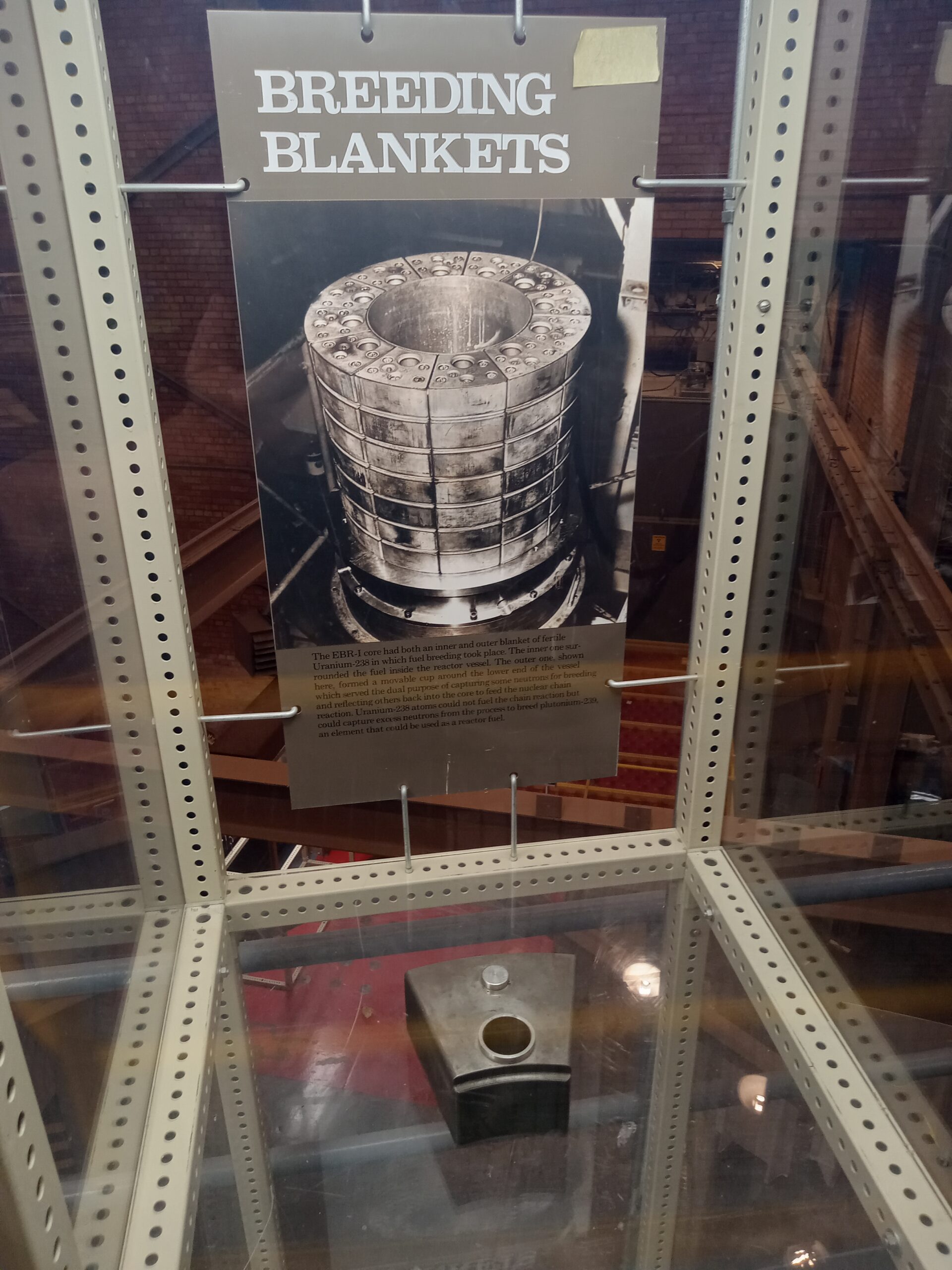 Each blanket element could be removed individually for maintenance and to carry away to extract the Pu239. Different locations in the blanket received different levels of neutron flux, with the middle getting the most, and the top and bottom the least. 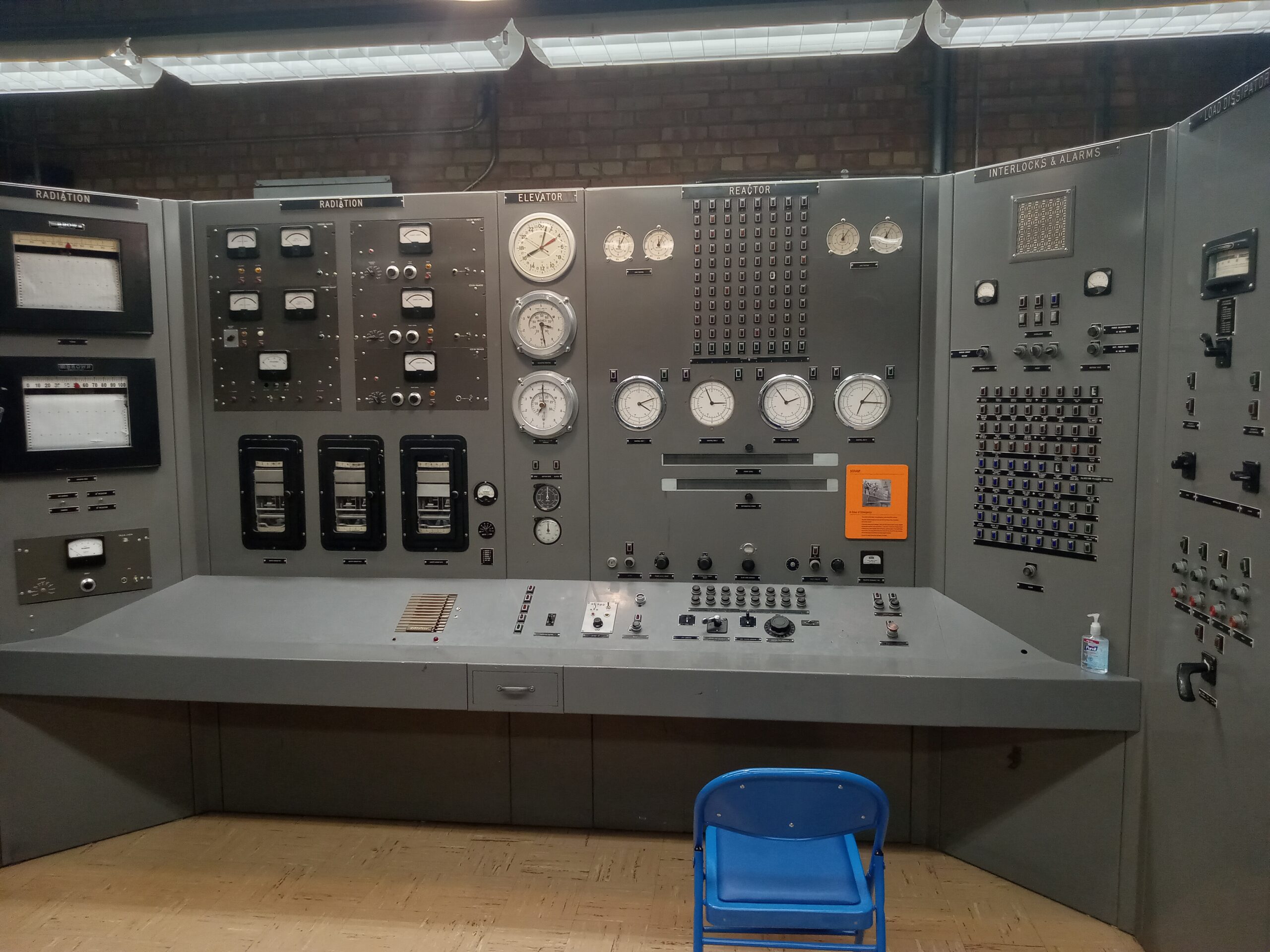 The use of NaK as a coolant carried some complications, since both substances react vigorously and exothermically with water. Great care in avoiding contact with the coolant and keeping any coolant leaks away from moisture was required. The site is in a semi-desert location, however, which in itself reduces the risk.

There were two docents, both university summer students. One admitted to being a political science major while the other was into hard science.

The former pointed out that the EBR-2 reactor was some 6-7 miles away, and I happened to remark that it was because if one of the experimental reactors should ‘come a cropper’, and contaminate a large area, other installations would not be affected. “Oh no” he said “that’s not the reason…”. Well, of course it’s the reason, but maybe a polit-sci type was concerned about not alarming the more naive fraction of the public with radiation fears.