The Table Mountain Star Party used to be held on Table Mountain near Ellensburg WA, but some years ago a wildfire left the area untenable, and organizers found a site at the Eden Valley Guest Ranch, just east of Oroville WA, which itself is just south of Osoyoos BC.

This year it was held from July 26th to August 1st. Star Parties chase the new moon, when the moon is not visible in the sky, and more importantly its light is not washing out all the dim fuzzy objects we seek to observe.

View of the Ranch from the entry lane 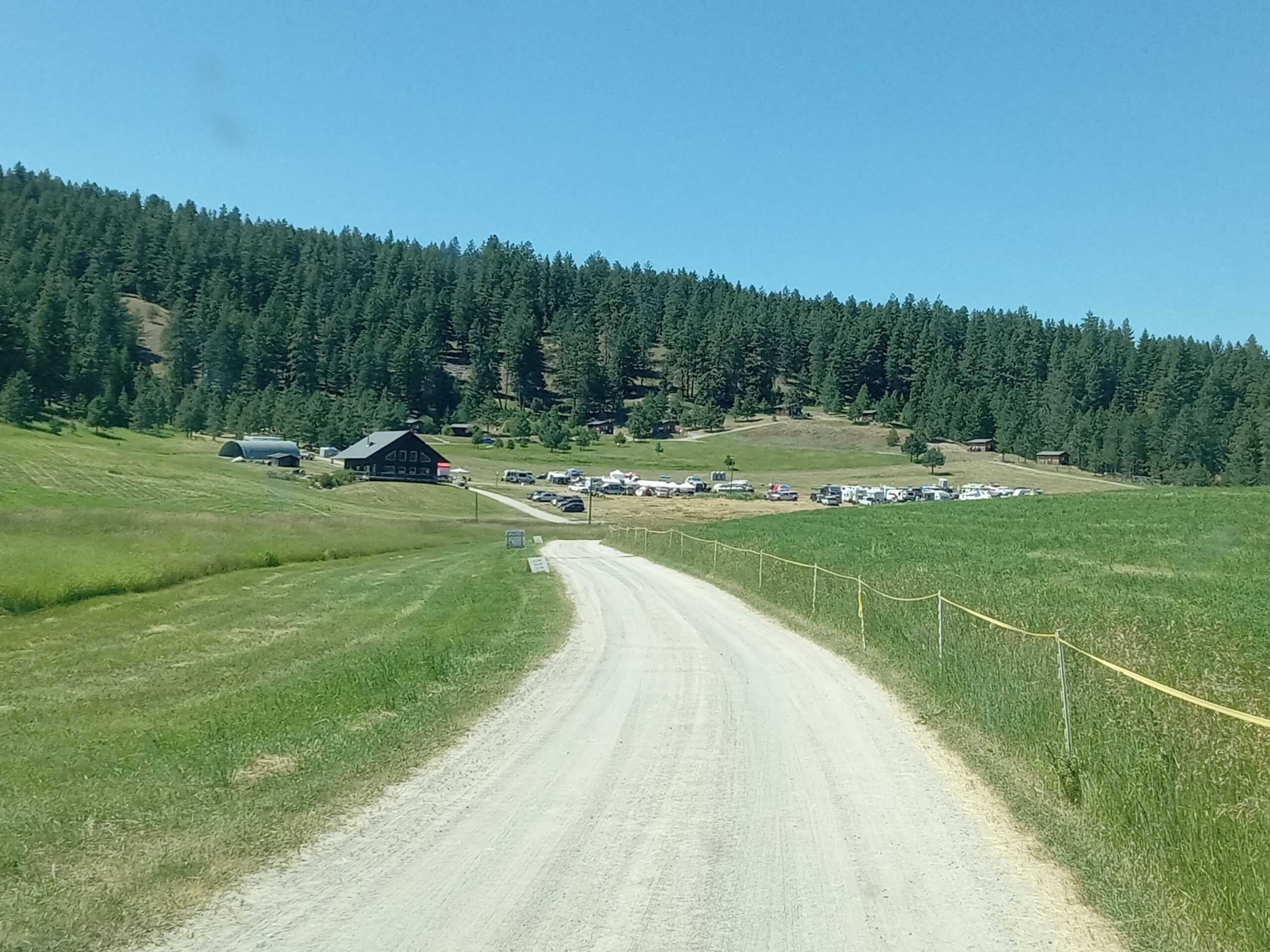 The cabins are in the trees to the west of the field, up the hill a bit. 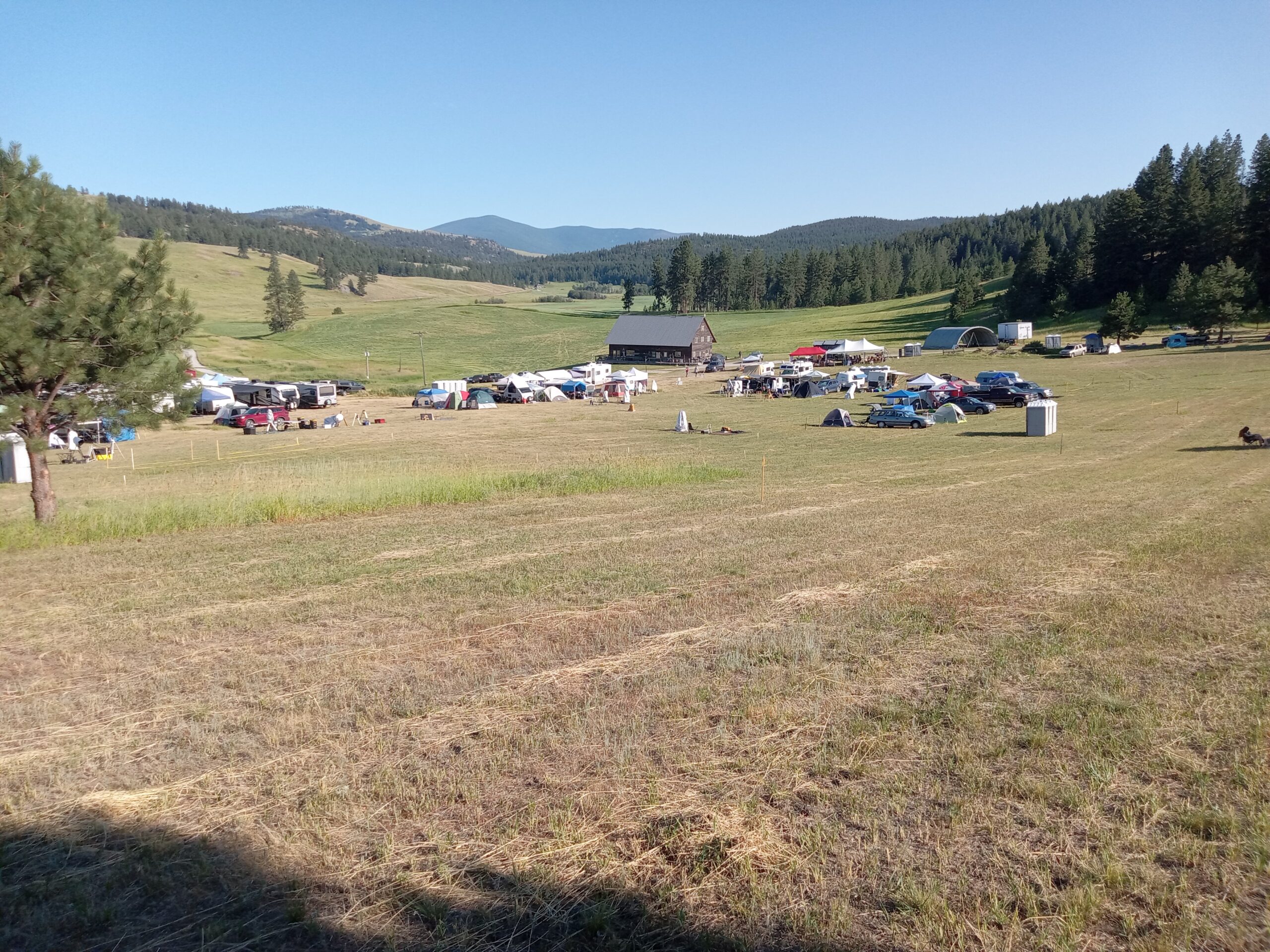 My faithful 1990 blue campervan can be seen on the right hand side. Also visible are some of the porta-potties and the big quonset used for the talks and other events such as:

The ‘Meet and Greet’, new this year 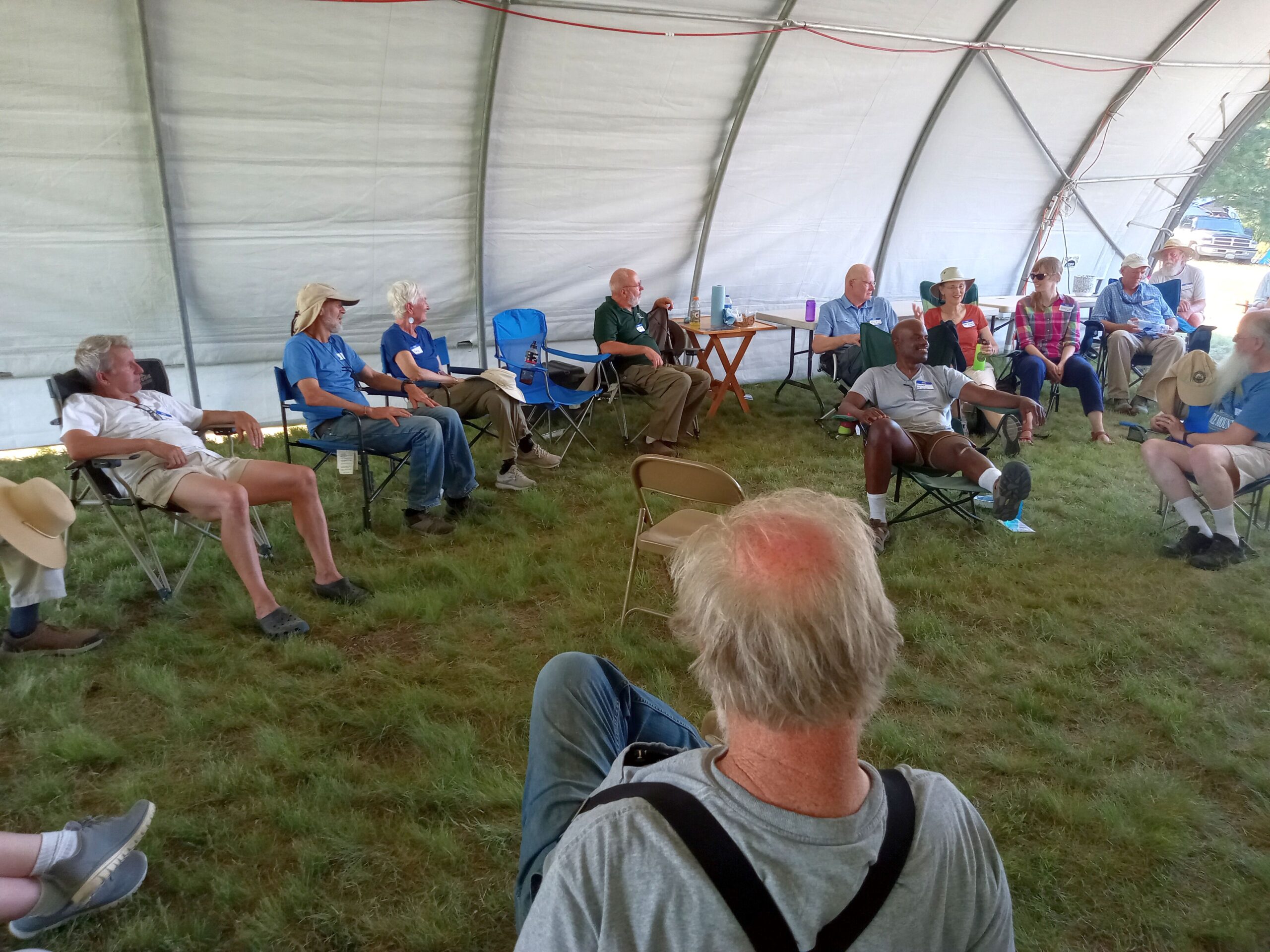 Talks included the latest from LIGO, the gravity wave observatory situated by the Hanford nuclear site.

The organizers had boxes of Nicole Mortillaro’s 2022 Night Sky Almanac that they were giving away, courtesy of the publisher, Firefly Books. Remaindered, perhaps? It appears to be a sort of Handbook Light, with less information but more pretty pictures.

Food service was available in the red and white shelter area also visible between the quonset and the Ranch house.

Staff and others of the food service 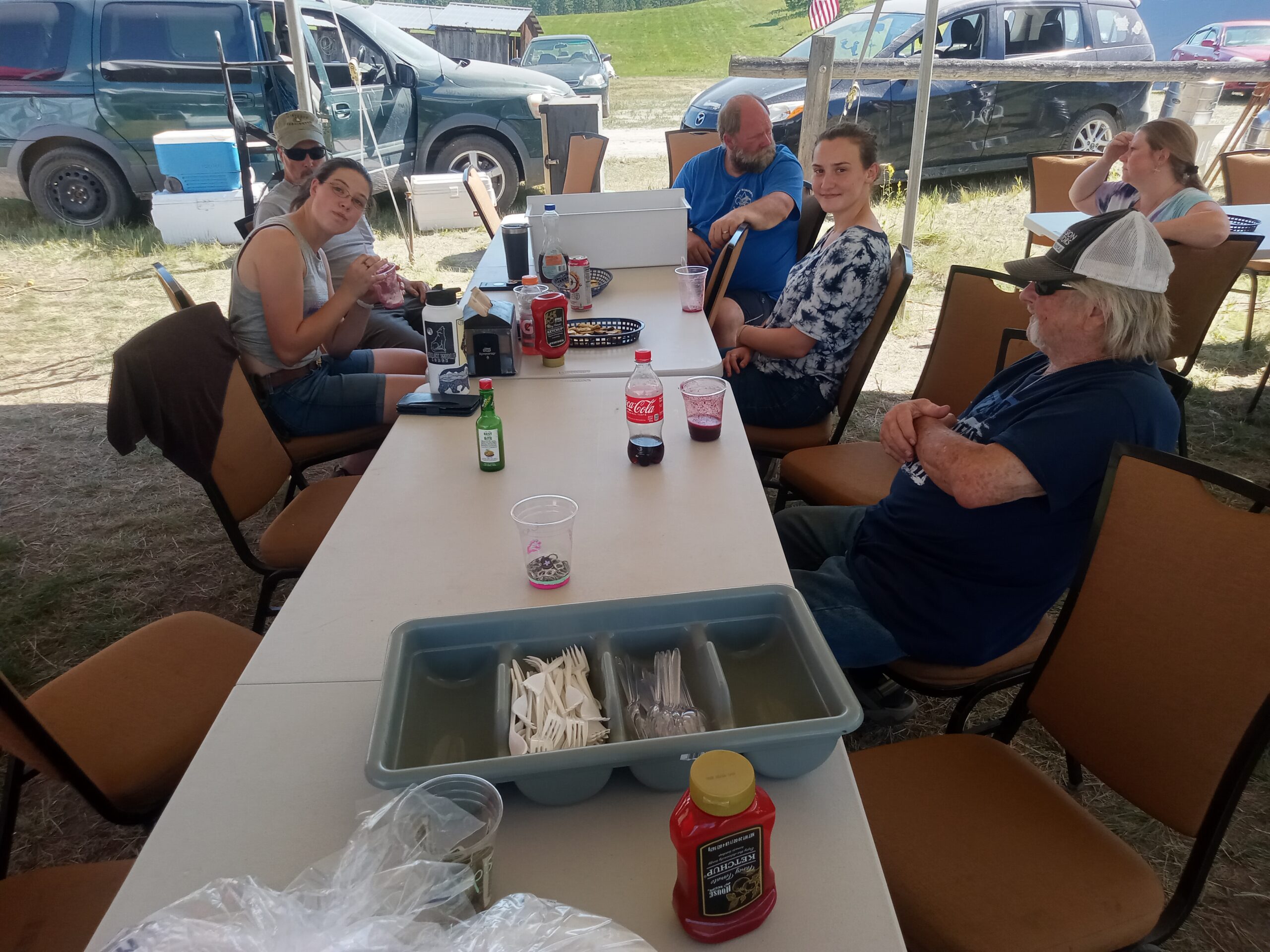 Burgers and Brats could be had at any time, and pre-purchased meals each evening with different themes. They also brought ice for sale, a most valuable commodity in the heat. Cold drinks, of course, were also greatly appreciated.

From my roof hatch, looking ENE 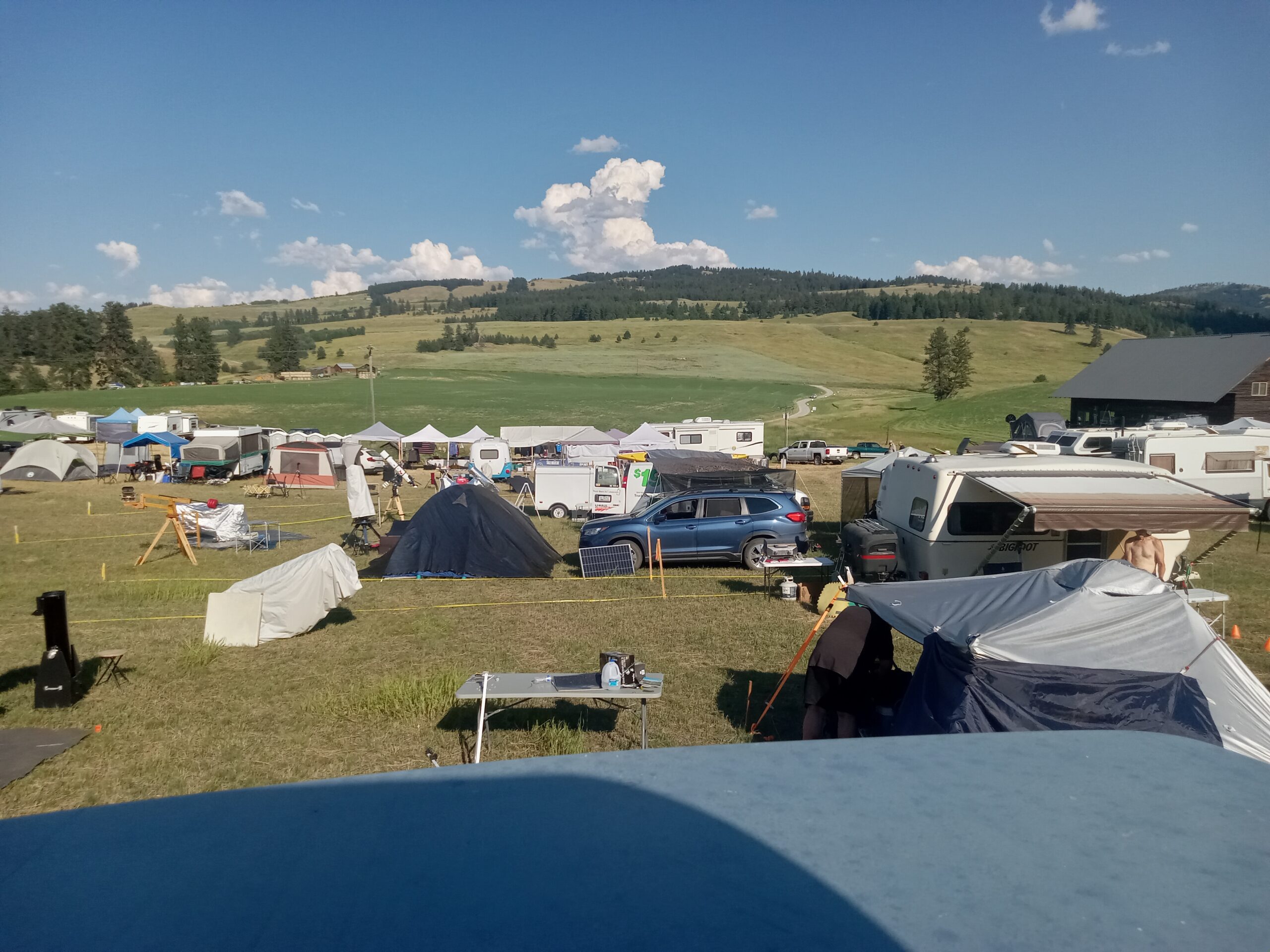 At one point, a dust devil went through our corner of the campsite, sucking up loose items and sending them skyward. One neighbour had his pop-up shelter twisted on itself and bent badly, while on the other side a tripod was knocked over and one of the castings on the equatorial mount broken by the impact.

Knowing that I had somehow (some years ago) lost the tripod spreader plate from my mount, he gave me the one from his, now unusable, tripod… and it fit perfectly.

My neighbour, holding his broken mount 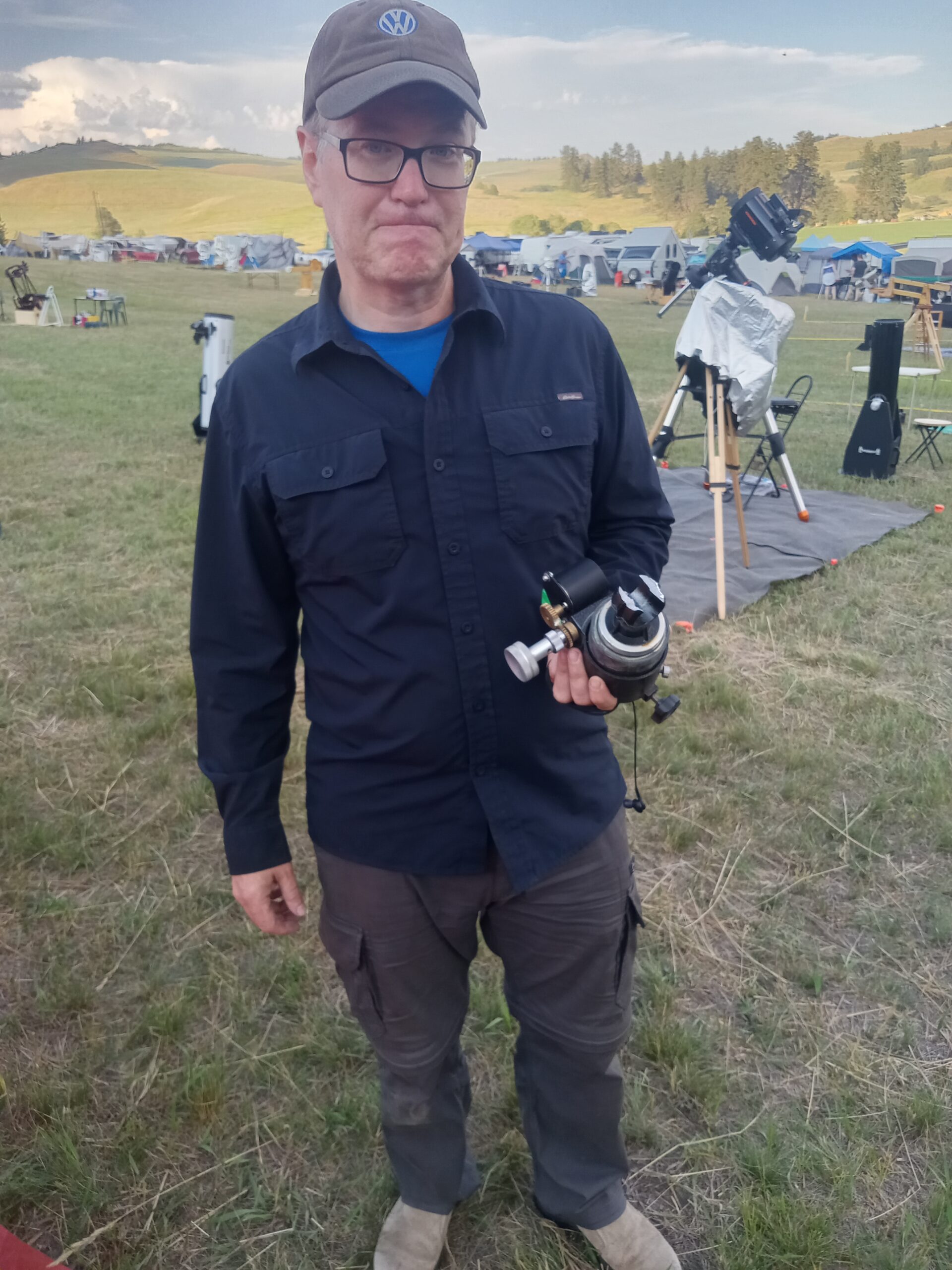 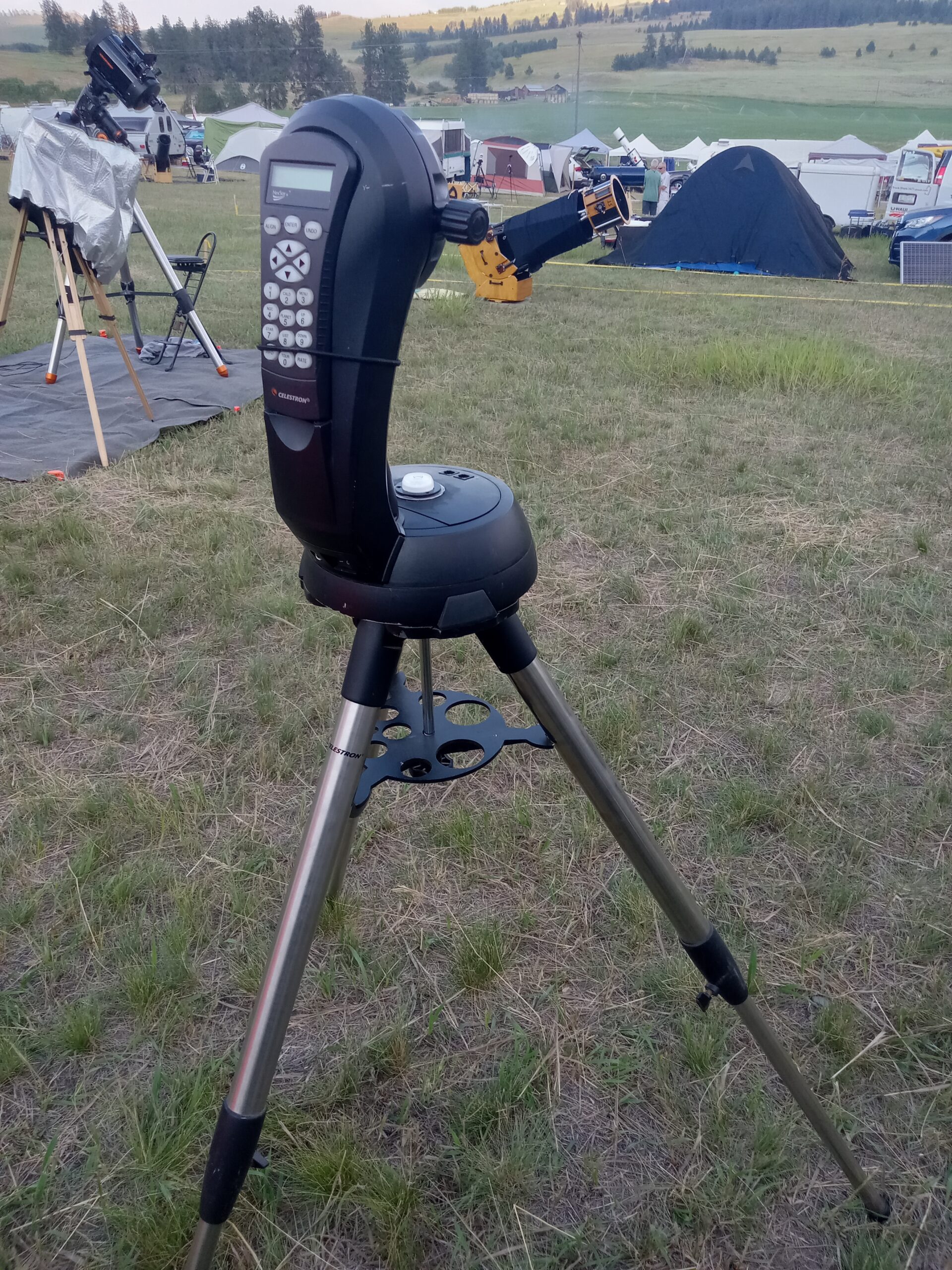 Another acquisition I made was a Meade 2080 Fork Mount. My old one had finally succumbed to time and elements, and the declination brake was flaky… either jamming up or occasionally entirely releasing the scope to flop around.

I fitted the optical tube with a Vixen bar to use it on the above SE6/8 mount, but the weight was a little too much for it, and it was a bit wobbly.

The guy was selling the entire scope, tripod, optical tube, and mount, for $395, which was more than I wanted to spend. But happily one of my other neighbours wanted the tripod and wedge, and another wanted the optical tube.

So between the three of us we gathered $400 and each made off with our respective prizes. Everybody was a winner. 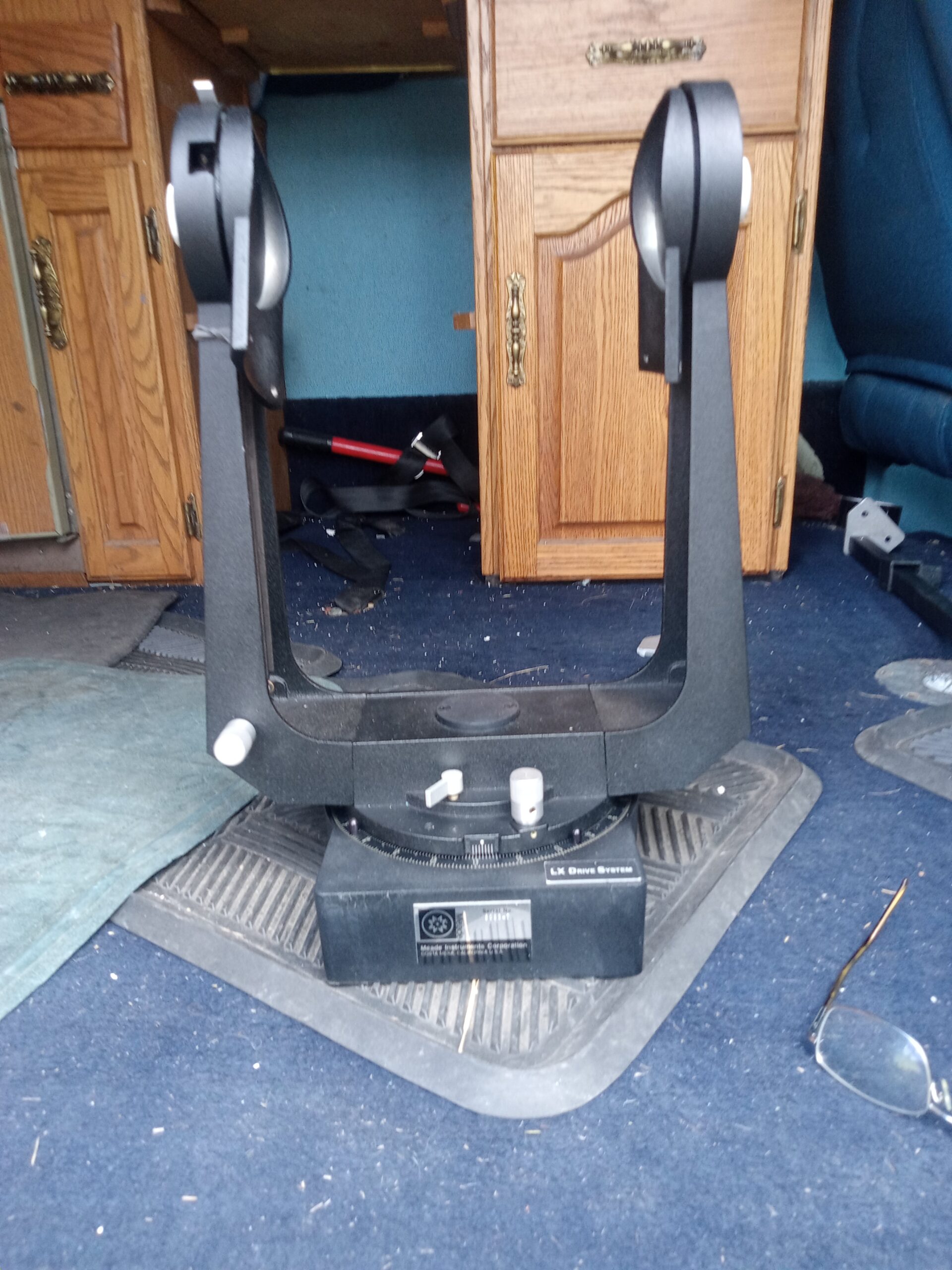 Heat during the day was intense, up to 104 F (40 C), but it cooled off rapidly after sunset… not jacket weather, but sweatshirt anyway. Sky clarity and seeing were generally excellent, and even the one evening where we feared rain, it cleared off after midnight. Venus, the Pleiades, Jupiter high in the sky and other delights awaited those who persisted into the morning hours.

On Sunday I finished packing up and headed into town to try to activate my ArriveCan app. I had tested it out using the WIFI at the Oroville Public Library, but now I couldn’t get it to work without WIFI, nor could I find any available WIFI.

Eventually, drilling down through several Settings menus, I located where to give my phone permission to access data over the phone network. It probably would have been faster had I had a twelve-year-old to help me out!

I had only bought the phone three weeks prior in order to use ArriveCan, and there are learning curves up which one must climb.

I do like the cameras, though, which took all of the above photos.