The members at the AGM would need to vote in favour of each of these in order to establish them as a permanent part of our Bylaw.

I suggest that the members vote to reject both of them.

The Board of the RASC has proposed two amendments, one removing the longstanding prohibition on Board members being simultaneously part of the executive of a Centre, and the other to reintroduce a measure that was firmly rejected by the National Council when it still held power prior to the creation of a separate Board.

Below in red are the provisions affected, and in blue, the Board’s remarks. (taken from the 2022 AGM website)

First amendment, to be removed:

History of this prohibition: This prohibition (which until 2013 applied to elected officers of the Society, before there were directors), has been in the Society’s By-Law since at least 1989. It was included in the revamped By-Law in the 1980s because of a theoretical concern that someone who was an officer or National Council Representative of a Centre might have divided loyalties between the Centre and the national Society as a whole. This would make it difficult for such a person to act in the best interest of the Society when discharging duties as an officer of the Society. No actual instances of any such conflicts were cited when this prohibition was put in place.
Reasons for the Board deleting the prohibition: The Board is of the view that the concern about conflict of interest that gave rise to the prohibition decades ago is largely theoretical and unlikely to result in any significant problems in actuality. There is no reason to believe that (i) significant conflicts of interest arising because a director was also an officer or an NCR of a Centre would arise either frequently or at all, or that (ii) such a conflicts would not be identified and declared by the applicable director.

We have, however, in the recent past seen how Robyn Foret, as Centre Treasurer,  took control from the Centre President, Roland Dechesne, of a minor disagreement between two Centre members, Heather Laird and Grace Nelson, and ramped it up to a personal vendetta against both Grace and Roger Nelson, and then exploited his role as Vice President of the Society to have Roger removed from the Board (without the required membership meeting) and then to expel both of them from the Society.

No one person should be able to utilize their positions of authority at different levels of the Society to attack and bully other members.

Second amendment, to be added:

3.2 Relationship of Society and Centre Members

3.2.2 No person who is not a member of the Society may:
(i) exercise any rights of membership of any Centre, including voting rights;
(ii) stand for election as a director, councillor, officer or National Council Representative of a Centre.

Reasons for the Board proposing to reintroduce these provisions: It is unknown for certain why these provisions of the Society’s existing By-Law were dropped from the By-Law that was newly adopted in 2013 as a result of the CNCA coming into effect in October 2011.

The Board need only have asked why this provision was not included. During my first year as President, while the National Council still had authority over the Society’s governance, it became apparent that two of our Centres, the francophone ones in Quebec City and Montreal, were egregiously offside with the provision, the former having roughly half their membership as ‘local only’ (ie- not members of the Society), and the latter roughly two thirds.

Both clubs used some coy wording to try to represent the RASC fraction of their membership as if it were a separate institution, but anyone with a basic grasp of the French language reading their websites could clearly see that RASC membership was merely an optional benefit of a larger astronomy club.

I was probably the first Society President since Damien Lemay to be comfortable reading French… and thus being able to notice the problem.

It was put to the National Council whether to implement the provision, but the suggestion was overwhelmingly voted down, just as I had anticipated. Since it was evident that the Society, as represented by the National Council, was emphatically against the section, it was not included in the subsequent new Bylaw implemented in 2013. Thus the two Centres were accepted as being in compliance with the Bylaw without changing their structure. 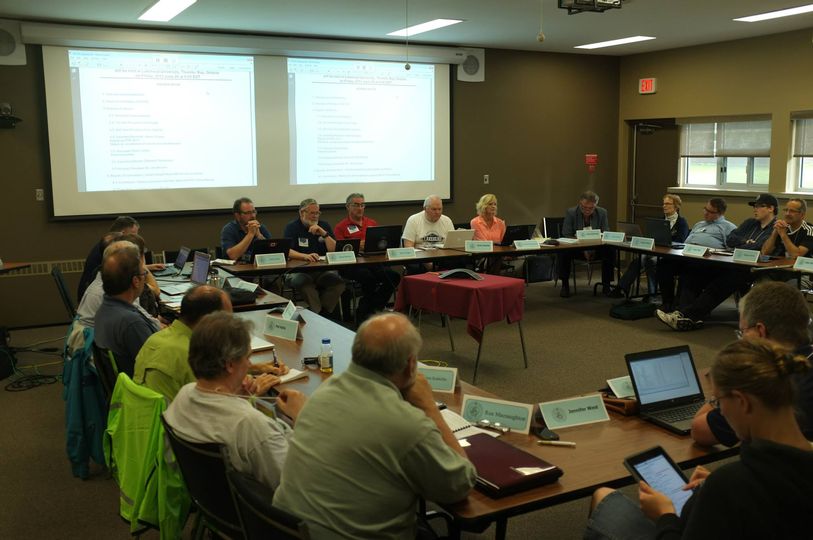 Reintroducing the provision now would leave the Centre francophone de Montréal once again in violation.

The Board has, in the past few years, expelled no less than four members, and given the emphasis on the matter we see here, are apparently quite prepared to expel even more members.

None of the long-standing members whom I consulted (going back to the 1970s and even 1960s) can recall a single instance of a member ever having been expelled from the Society prior to 2016, though some Centres have occasionally turfed someone out of their Centre.

Expulsions are a new phenomenon with the RASC, one introduced by a Board seemingly consumed with its own self-importance.

Addendum: One previous case of an expulsion by the National Society has been signalled (see comments below by JA), but it’s been heretofore a rare event.

Addendum: On June 26, 2022: Robyn Foret sent out, to the membership, an email rebuttal to my remarks, including an admission that the Board will not be implementing the RASC ‘local only’ membership provision against the most egregious example, that of the CfM… which is as I predicted. For Robyn to send out such a panic-stricken plea suggests that he, and the Board, know full well that they intend being incoherent and arbitrary in the application of our Bylaws, and are afraid that other members will notice the problem.