The FOIP request I sent to the Calgary Public Library, for the incident at the October 20, 2022, RASC public meeting has revealed some interesting details.

Images of the pdf file sent to me are included, below.

First, the Calgary Public Library has determined that I did nothing to contravene the Library’s code of conduct. I actually chatted on the phone with a representative of the Library who apologized to me for the incident, and told me the suspension of my library card had been removed.

The security guard’s narrative says he was told that I had been harassing some other member, when in fact I had spoken briefly with Roland Dechesne only because he accosted me, and had simply gone from that encounter and quietly found a seat in the performance hall to await the presentation. I had spoken to no one else, and interacted with no one else… and certainly harassed no one at all.

The police officer who came to look for me seem perplexed, perhaps expecting me to be some sort of troublemaker, and instead found me sitting quietly by myself. He asked me why the RASC had an issue with me, and I was honestly unable to give him a cogent response. 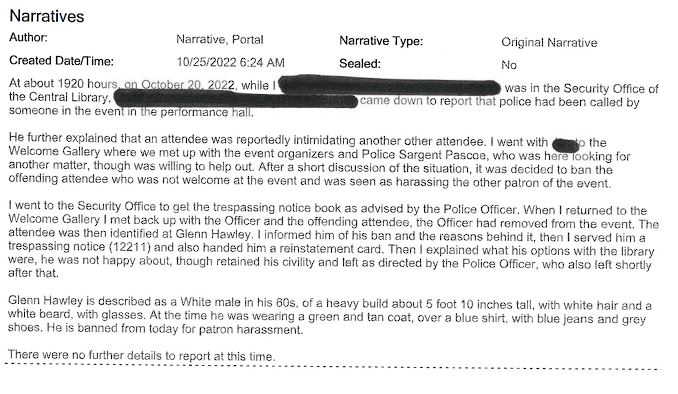 The next narrative gets even more interesting. It is claimed that there existed a ‘restraining order’ against me, that the member referred to as ‘H’ had called the police to enforce such an order.

If there really were such an order filed, I would surely have been notified of its existence by the relevant authorities… but this idea was a complete surprise to me.

A permanent (as opposed to an ‘exigent’, or ’emergency’) restraining order requires not merely informing the target of the order, but generally involves a court case where the target has an opportunity to argue why the order should not be granted. Nothing of the sort has ever transpired.

I have to conclude that no such order exists… and that somebody is lying. 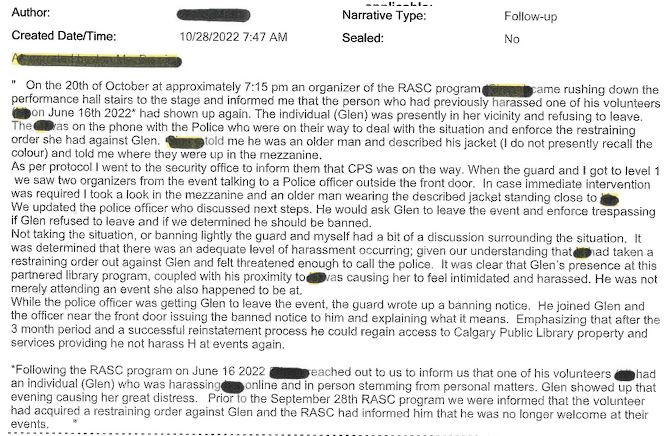 Telling fibs about an inexistent ‘restraining order’ may seem harmless enough, but when the fibs are told to the police, especially when  those fibs are intended to induce the police act against someone, a potential indictable offense is committed.

Fibs about my supposedly harassing anyone at any of these meetings only add to the burden of falsehoods.

I have not actually spoken to the member referred to as ‘H’ (undoubtedly Heather Laird) since the summer of 2019, more than three years ago. While I saw her at the October 20 meeting, I said nothing to her, and just ignored her as I entered the performance hall.

The only person being harassed in these events is me.

So who exactly was lying to the police? Chief suspects appear below, in a security camera frame, with Robyn Foret, Simon Poole, and Roland Dechesne apparently exhorting the officer to intervene to take me away.  Heather does not appear in this photo, though she is almost certainly the actual originator of the complaining.

I cannot identify the bearded man in the checked shirt. 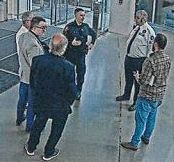 The denouement that followed awaited my submission of the FOIP request that resulted in the provision, by the Library, of these materials. It took some time since I had no prior experience with submitting such requests.

I did speak with Mr Durant of the Library on December 14th, and we had a pleasant conversation.