Artist’s conception of the TMT, looking up toward existing telescopes

The Thirty Meter Telescope project involves, as the title suggests, a telescope whose primary mirror is thirty metres in diameter. Most people involved with astronomy are well aware of the advantages of placing the instrument a bit below the summit of the extinct volcano, Mauna Kea, on the Big Island of Hawaii.

Over 4000 metres of elevation (meaning not very much atmosphere to be looking through), steady and usually laminar flow of easterly winds (meaning limited turbulence in the air), lower elevation facilities nearby (so the astronomers don’t have to endure the high elevation), very low humidity (since most of the rainfall happens at lower elevations), very limited light pollution, a good road access to the site for maintenance and upgrades, and the location at 19 degrees North Latitude offers views of all of the northern skies, and most of the southern skies as well.

Many of the observatories already on the mountain are among the most productive in the world: 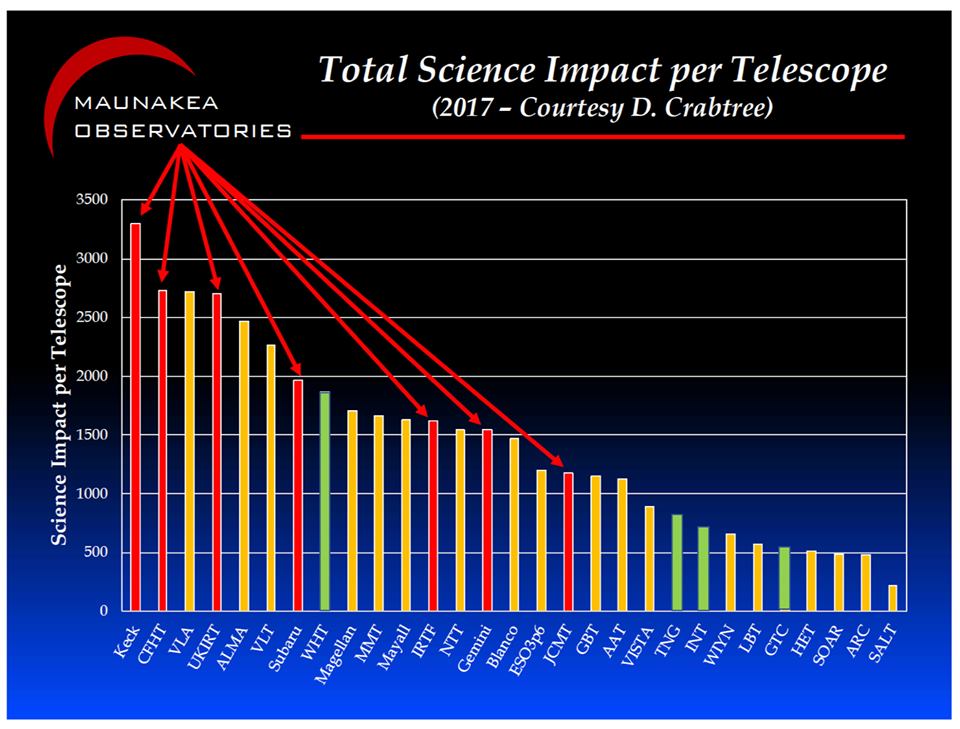 Mauna Kea is thus well-recognized as the absolute best spot in the northern hemisphere for a telescope of this magnitude. The location was chosen in 2009, and construction began in 2014, only to be met by mobs of protesters blocking the site.

Years of litigation followed, with the TMT backers, the University of Hawaii, the Bureau of Land and Natural Resources (BLNR) offering an extensive set of compromises, including removal of some of the existing 13 telescopes, and a promise that the TMT would be the last telescope built on the mountain. The ‘Contested Case’ trials ultimately led to the reissuance of permits for construction in 2019.

But when construction resumed, even more ambitious protests were set up, ignoring the ‘Contested Case’ results, and blocking the access road where it leaves the Saddle Road running between the two biggest mountain peaks, Mauna Kea and Mauna Loa.

View of the 2019 protest camp, looking toward Mauna Kea: 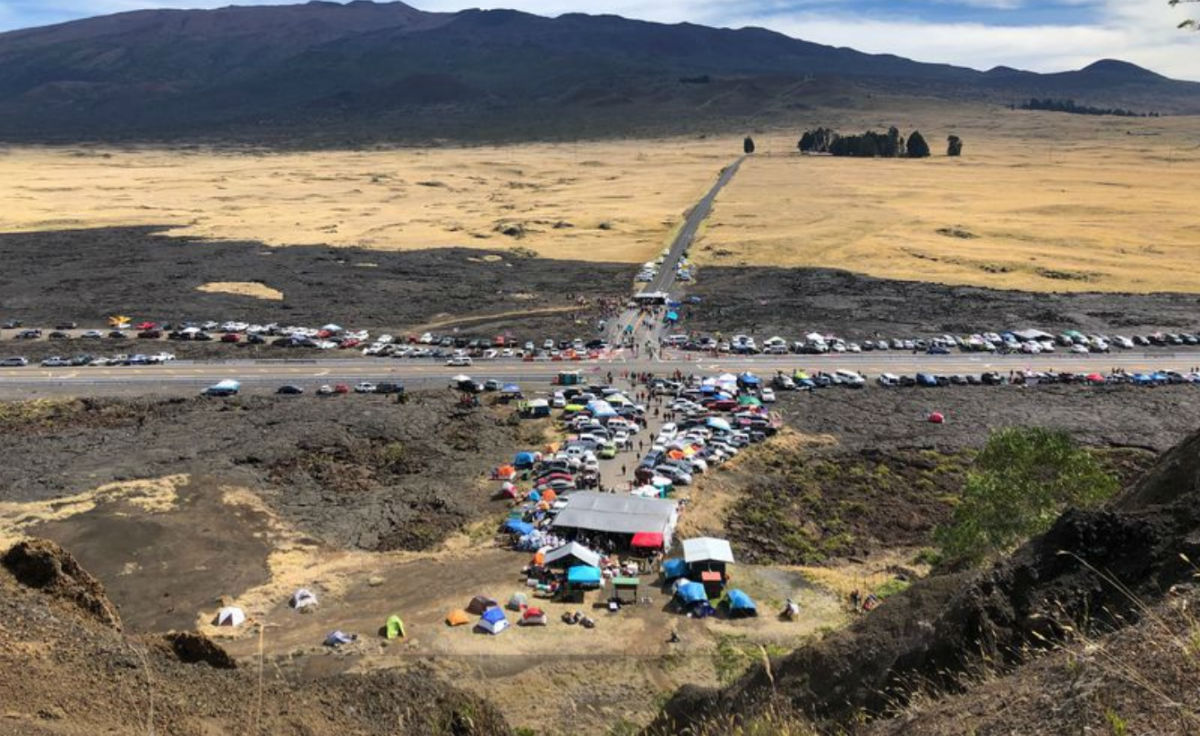 So why is there such a controversy?

The TMT appears to be a symbolic victim of resentment from indigenous Hawaiians toward the government of the State. Anyone who can demonstrate a ‘blood quantum’ of at least 50% native Hawaiian ancestry can lay claim to a number of privileges, including land grants  and housing, but waiting lists are long for these freebies.

Some of the protesters claim the mountain to be too sacred to tolerate telescopes on it, even though the actual summit has never had any instrument placed there. A major appeal is to the traditional Hawaiian religious beliefs. However, we can get some idea of how the ancient Hawaiians viewed the mountain by the existence of the largest neolithic Quarry ever discovered, at elevations of up to 3,900 metres, not much lower than the summit at 4,200 metres.

One can see how tiny the footprints of the telescopes are compared to the  size of the quarry: 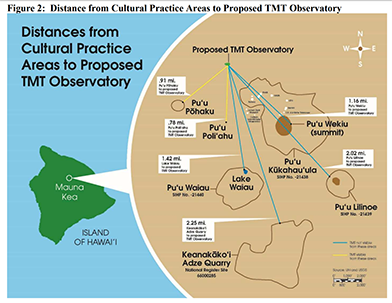 The quarry was exploited for at least seven centuries, according to carbon dating of the latrines, gouging stone out of the flank of the mountain for adze heads and other tools. These were used not only in Hawaii, but widely traded as well, no doubt to the profit of the chiefs (Ali’i). Usage stopped in the early 1700s, possibly because the then-encroaching Little Ice Age may have meant that ice and snow remained all year long in their working sites.

So the ancient Hawaiians felt that this industrial scale extraction was compatible with the sacredness of the mountain, yet the modern re-interpreters balk at mere observatories that remove nothing except photons.

There have been claims that the telescopes were contaminating the site, and that chemical spills will trickle down to the agricultural lands at the base of the mountain. While there have been small losses of hydraulic fluid, lubricating oil, and even mercury from a bearing, the precipitation is so low, and the spills confined to the telescope foundations, that this would be impossible. Even water from the rainforest zones below 2000m level takes over a thousand years to percolate down to the lower levels.

It may be that the telescope will finally be built (after years of delay) if some sort of compromise between competing views of history and science can be resolved. Some sort of celebration of native sky lore or inclusion of native voices in Astronomy might be possible, even though those are no more applicable to the actual research being done than astrology would be.

Even at that, though, so much of the protesters’ ire is directed at things completely unrelated to astronomy, toward things over which the TMT has no influence whatsoever, that this marvelous instrument may be lost to us forever.

Ultimately, the protesters position is heavily dependent on feelings rather than on anything rooted in reality.

Even institutions like the Royal Astronomical Society of Canada now refuse to endorse the TMT, which does not bode well for the project.

Note: it has been suggested that the TMT could be built in the Canary Islands, but it would be a mile deeper into the atmosphere, with higher humidity, more precipitation, and with risk of occasional dust storms blown off the Sahara. This would reduce productivity by an estimated 40-50% compared to Mauna Kea.

It has also been claimed that the instrument would be better sited in space, where atmosphere is not a problem. However not only is a space location lavishly expensive, but access for maintenance and improvements is extremely difficult.

For example, even the ‘old school’ and relatively modest-sized 3.6 metre CFHT (Canada France Hawaii Telescope), though in service since 1979, remains one of the world’s most scientifically productive instruments, largely due to the fact that improvements in instruments such as Sitelle, or ESPaDOnS keep observing capability at the highest level. Such improvements would be well-nigh impossible to install in space.

Glenn,
And on it goes. An Update on this file https://www.civilbeat.org/2022/07/us-environmental-study-launched-for-thirty-meter-telescope