Atomic Energy of Canada Ltd (AECL) put out an internal report in late 1979 on the Three Mile Island Reactor Two incident. This is written with engineers and scientists in mind who have some idea of how reactors function, but is also readable by laypersons with a little effort.

This is scanned from the copy owned by my father, Edward Hawley, who was at the time an engineer at the WNRE (Whiteshell Nuclear Research Establishment) of AECL, in charge of Instrumentation and Control Systems.

Glossary of some acronyms used in the AECL Report:

AB= Auxiliary Building (outside the containment)

The operators were trained to maintain a steam bubble in the pressurizer tank, and trying to do this occupied much of their attention. Since the PRV had stuck open, their steam bubble kept escaping, giving them the erroneous impression that there was too much water in the reactor. A reactor completely full of water (referred to as  ‘solid’) would not be able to respond gracefully to changes in volume and pressure, and damage to piping could occur.

Page 9, the prominent gauge indicating the average of inlet and outlet pressure readings (since those were off scale much of the time) hovered around 570 degrees F, misleading the operators into thinking that all was well. In fact they had superheated steam in the top part of their core, and relatively cool water at the bottom, with limited or no circulation.

Page 14, State authorities demanded that they stop releasing steam at around 9 hours after the incident started. Unstated is the fact that the operators were thus deprived of an important heat sink thereby.

Page 14, people from both Babcock and Wilcox staff (B&W designed the reactor, but not the control room) and the NRC (Nuclear Regulatory Commission) tried to convince the operators that their core was uncovered and that they needed to immediately repressurize the system. It was over five hours later that their advice was finally heeded.

Figure 4 shows how the top of the core was twice uncovered, and then twice was rapidly quenched. Sudden cooling of very hot metal causes it to shatter like glass, and broken pieces of fuel and core lattice fell down deeper into the core, where too close proximity between fuel elements, plus obstruction by debris of what little coolant access  existed, exacerbated the heating and led to melting of part of the core, with some mixed debris falling to the bottom of the pressure vessel.

The report is here in pdf format:

While Metropolitan Edison was (at the time of the AECL Report) claiming that damage to the core was minimal, the actual end state, as found after 1982, looked as below. Most of the core was wrecked.

I visited the site in 1990, and found there was a tourist kiosk across the river from the power plant, selling among other things a T-shirt with the various important components diagrammed. I asked if it glowed in the dark, but apparently that would have been in poor taste. The last debris had recently been removed from the pressure vessel.

The reactor could have been put back into service, since the only major damage was to the core while the pressure vessel and piping remained intact. But political and public-relations factors meant that it was never restarted, punishing thereby not only the power company, but of course the ratepayers as well, whose power bills necessarily reflected the economic cost. 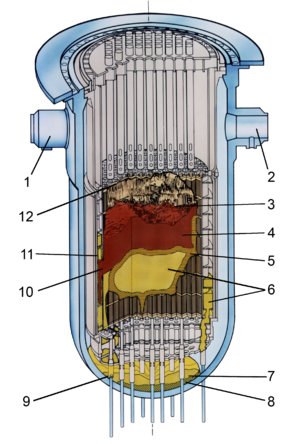